Genuine insight sometimes bites into our awareness like an Old Testament vision in the desert. I favor this simile due to a personal experience etched, with the help of a set of Kodachrome slides, vividly into my memory. It occurred in the arid openness of Nevada during the summer of 1977 while traveling alone, by car, to visit a childhood friend in California. Having just completed my first year as an elementary school art teacher, and, thus, being of meager means, I had contracted with a moving company to drive a vehicle to San Francisco. This, according to the company, would be a journey of no more than four days, requiring a set number of stops to fulfill the contract, and receive a small recompense for my time.

Having dallied a bit in Chicago at the end of day one, thus leading to a late start the next morning, I devised to sleep in the car in order to expedite getting to the border of California by the end of day three.  With night falling on day two, I located the perfect spot next to a semi on the shadow side of a one-light gas station somewhere in southern Wyoming. Heading out early the next morning with no plans of stopping for anything but gas or nature, I found the highway to be smooth and open. All proceeded as planned when unexpectedly, between Lovelock and Winnemucca, Nevada, I lost all sense of the road when what looked like a McDonald’s from Hell appeared over the horizon. 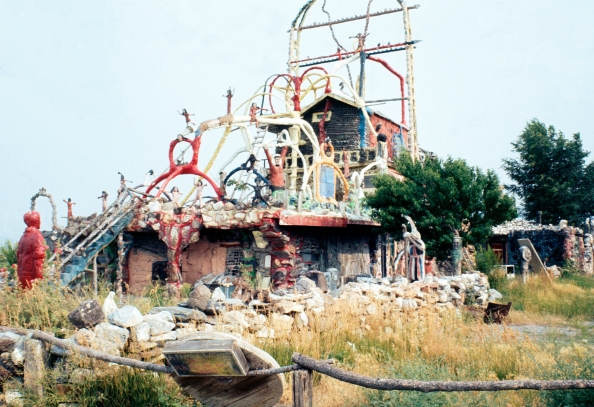 Cruising comfortably over the speed limit, I became transfixed at the sight of several wheel-like arches of multiple hue lifting their bony skeleton into the sky. The rounded loops of metal and paint were rooted in a squat meandering building with many life-size sculptures of people on the roof, against the walls, in the yard, and even on the arches. Shooting past with my mouth opened, I arrested my present speed and grabbed the first exit, trading the federal highway for the municipal asphalt, which, predictably, turned to dust within a few hundred yards.

Keeping one eye on the web of arcs, and the other on the road, I backtracked my way past open-range fields only to skid to a halt before a barrier pole set between two wooden posts surrounded by multiple hand-painted signs making no bones about the inappropriateness of my presence. “Posted: No Trespassing! Private Property! No Hunting! Sacred Holy Place, Home of the Day Oh Bay You Daowha He We Rath Dahlnee, No Enter Without Written Permission, No Trespassing, No Exceptions!”

All of this gave strong indication on having arrived at my intended destination.

Exiting the car, I read a long sentenced sign about the sculptor feeling harassment, and not wanting to see anyone, and something about the Indian Nation, and the Christian Church, but the words flowed on like rainy-day run-off and I had to look away. Unsure of how to proceed, I decided to get a better view the building, now just several football fields distant. Climbing up onto the car’s bumper, the sheer magic of the place became stunning. There were several buildings, a walled garden, a car or two and many sculptures. Any fear the loathsome signs might have attempted to implant in me vanished, and, in a blink, I grabbed my camera, locked the car, jumped the divide and began trekking the remaining distance on foot.

After 50 yards, the distinct sound of dogs barking erupted from the direction of the building, causing my arm hair to stand up and my feet to resist my mind’s direction. Turning slightly, I caught the sight of a tall lanky man emerging from an opening in the garden wall surrounding the building. Swiftly diminishing the distance between us, he began shouting, “Go away, go away and leave me alone! Can’t you read the sign?” “Hello!” I called back, “I’m an artist from Ohio. I saw your building from the highway and wanted to admire your marvelous work.”

Flattery had always been my strong suit but now it played into trump. “Get out of here,” he screamed. “Can’t you see I’m busy?” With utmost disarming respect, I repeated my cause, but this only served to quicken the man’s pace as he continued shouting, “No, go away. People like you come here all the time! You look at my museum. You take pictures.  You interrupt my work.  What do I get for this? Nothing!” In a genetically embedded reflex of affability, I reached into my pocket to grab what I had budgeted for daily meals. “Would $20 help?” I pleaded. The figure stopped in mid stride and looked hard in my direction. Turning sideways, and in a deadpan voice reminiscent of Cary Grant in An Affair to Remember, my now relaxed adversary shouted, “Honey, we have a VIP!” 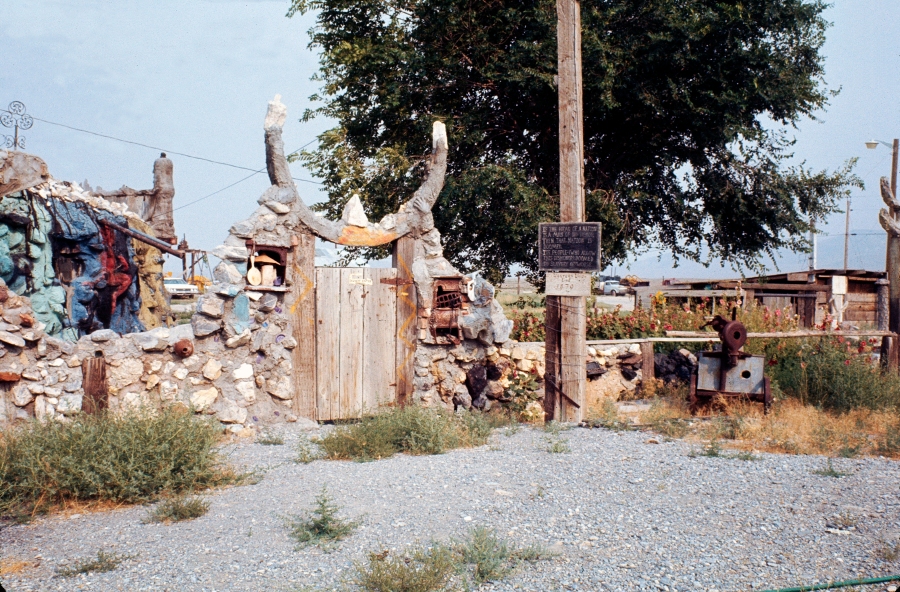 This is how I found my way to the magical sculptural environment of the Visionary artist Frank Van Zant, who quickly introduced himself by his self-adopted Creek Indian persona, Chief Rolling Thunder. I would not learn his given name, nor the fullness of his story for many years, but the experience of walking with him, talking about his artwork, his ideas, and his passion, broadened my sense of where art comes from, who is involved in its making, and why humans create. The Chief’s life was his work. His family, wife and several children, lived in the middle of a growing sculptural environment. He mentioned people visiting in the past, staying, and helping him, but for the most part, the vision and purpose were his alone.

The year before travelling west, I had enjoyed the seminal Naive and Visionaries exhibition, curated by the late Martin Friedman, when it moved from the Walker Art Center to the Dayton Art Institute, where I worked part-time. The nine artists represented in this exhibition were a primer for the experience of meeting and viewing Chief Rolling Thunder’s visionary body of work. The Chief wanted me to know the importance of what he was about, and I felt, somewhere within our interaction, an overwhelming sense of evangelical mission. He talked about the individual sculptures honoring the sacredness of Thunder Mountain. He described how each had its place in the building of a Museum to the American Indian. Inside the walls, with their multi-colored bottle windows, a room was set aside for the display of artifacts and implements. His work, he said, was a sacred service to his people, and he encouraged me to walk the length and breadth of the compound, take pictures and ask questions. 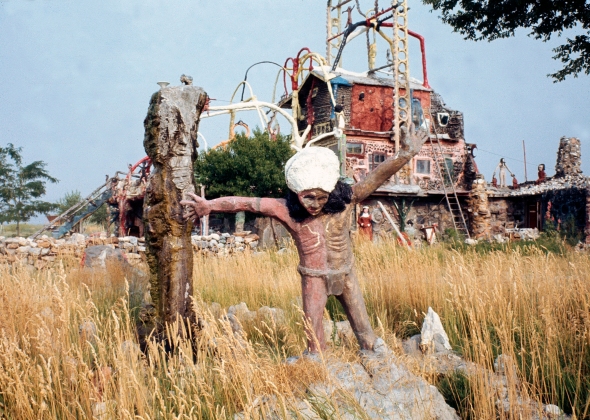 I ended up spending over two hours on the property and was way off schedule, but felt the time to be more gift than loss. After thanking the Chief, I promised to return, and did briefly, about a month later while I was traveling back to Ohio. Once in Dayton, I shared my experience with the artists and teachers I knew, and even gave a community lecture about the art in the desert. I received a few calls from friends when Chief Rolling Thunder appeared on the cover of the premiere issue of the short-lived Art Express magazine in 1981. I bought a copy. The story, written by critic Janet Goleas, aligned with my experience, and I was pleased to see the Chief described as being on the must visit list for European art travelers, steeped in the aesthetic appreciation for Art Brut.

The article did mention the Thunder Mountain Museum as being a target for local ridicule and misunderstanding, though with little emphasis on the gravity of the situation. Much later, I learned what transpired in the years following the publication of the article. The property came under attack by arsonists in 1983, destroying much of the artwork and buildings. The attack, ironically, occurred within months of Chief Rolling Thunder receiving the honor of being Nevada’s Artist of the Year.  Unfortunately, with much of the property now damaged, roofs began to leak, and conditions within the remaining structures deteriorated.  Six years later, things were not much better, and the Chief’s wife and family found it necessary to abandon the site under threat of Child Protective Services. Alone and depressed, the Chief took his life in December of 1989.

Today the Thunder Mountain Monument receives protection as a State Historical Site. Restoration is underway with support from a number of sources including several of the Chief’s children. Time has also permitted discovering a little bit more about Frank Van Zant, before the weaving of the myth of Rolling Thunder, Thunder Mountain, and the Museum of the American Indian. The story begins to unravel by just examining a map of the Imlay region – Thunder Mountain does not actually exist – but the magic of Visionary art knows no such arbitrary boundaries. It is a work of the human spirit.

Frank Van Zant, a WWII veteran from Oklahoma, served in the European campaign with the 7thArmored Division. Toward the end of the war, he suffered injury in a tank battle near Leipzig. After returning to America, Van Zant moved to California, and began working a series of jobs, including being a police officer. Married with a family of eight, Van Zant, who claimed to be one-fourth Creek Indian, nourished a life-long interest in American Indian history. To all appearances, Van Zant’s life was typical of many post-war veterans. However, after the death of his wife in the 1960’s, and, later, the suicide of one of his sons, things began to change.

In 1968, a personal awakening propelled Van Zant to leave California on a mission to build a monument to the American Indian. With a new young wife in tow, they bought several acres outside Imlay, Nevada. By 1969, as Frank Van Zant disappeared, Chief Rolling Thunder emerged to fulfill the spiritual quest. He began building places of shelter – some think in preparation for a coming apocalypse – and an American Indian museum. During my visit, I did not think to count the number of buildings on the property, though I remember at least four. The site would eventually grow to seven buildings before the fire; three, along with some 200 sculptures, are still standing today. 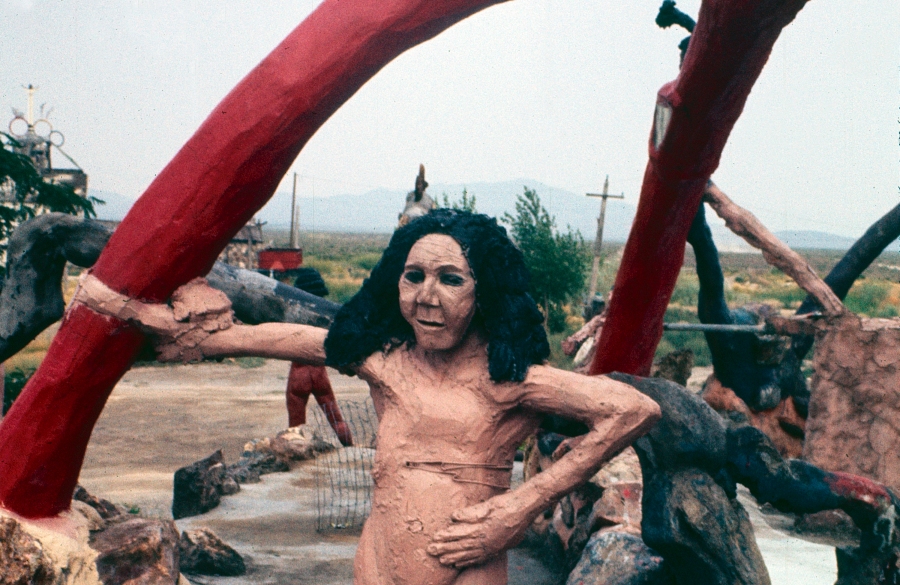 Human history is full of shrines and sacred places. The preservation of memory and the depth of the human spirit have a profound need to coalesce and take physical form within human experience. Traces can be found across the globe, from desert caves in Northern Africa, to the sacred springs of Celtic lore, to the impromptu roadside memorials found along US highways. We do these things realizing no human effort is permanent. We can hope, though, the work of our visionaries will remain just long enough to remind us of our own need for connections: to our common past, to what is now, to what will come, and to what is beyond our dimension of knowing.

One sculptural work, in particular, found harbor in my memory. I recall it whenever I think about Chief Rolling Thunder. It is not typical of his oeuvre, but, when I saw it for the first time, I felt indicted by its presence. Not due to its ability to reach across a targeted stretch of American history, though this is certainly present in the work, but across my own desire to live an honorable life. I will let this image speak for itself. 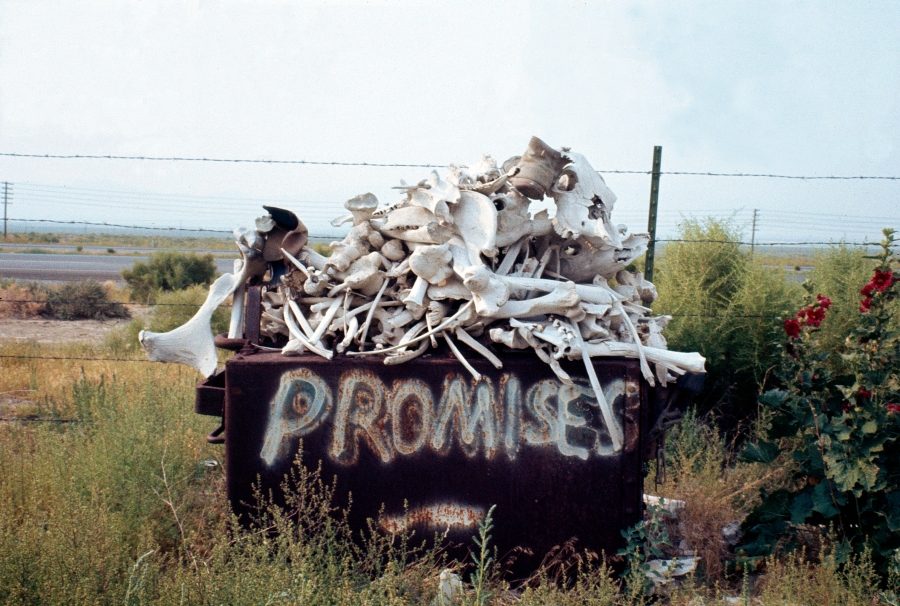