Regarded as one of the most important books of the 15th century, the Liber Cronicarum, also known as the Nuremberg Chronicle, was the most extensively illustrated books of its time. Incorporating 1,804 printed images derived from 641 to 643 individually designed and cut blocks, the text covered the history of the world from Creation to 1492, in just 336 pages. Classified as an incunabulum – books printed with movable type before 1501 – the Liber Cronicarum was printed in both Latin and German editions, the German being completed two months after the Latin Edition. The size of the published Latin Edition is estimated to be somewhere between 1400 and 1500 copies.

Michael Wolgemut, master of the illustrations, employed several assistants to carve the blocks on which the illustrations were drawn. Some of the more gifted even drew the minor illustrations, the young Albrecht Durer among them.  Additionally, for an unknown number of copies, a group of artisans applied watercolor to the illustrations, making each colored copy a unique work. Approximately 400 complete Latin Edition copies exist today. Many partial copies, however, were unbound in the 19th century when the individual woodcuts became highly prized by art collectors.

The Baronia Magna Germanie Provincia (Saxony) illustration, like many of Wolgemut’s woodcuts, appears more than once in the Liber Cronicarum. The scope of the project would have been too expensive if blocks depicting every individual and every town were unique. This does not diminish the importance of the work. It simply illustrates an all too human need to adapt to the reality of the resources at hand. These two leaves, however, are unique for one reason. When unbound, the conservator recognized the importance of the vellum strip holding the two leaves together and chose not to separate them. Vellum, made from animal skin, is the principle writing material in hand-written medieval manuscripts. This small piece, most likely, dates from around the 13th century introduction of paper in Europe. Why is this here? 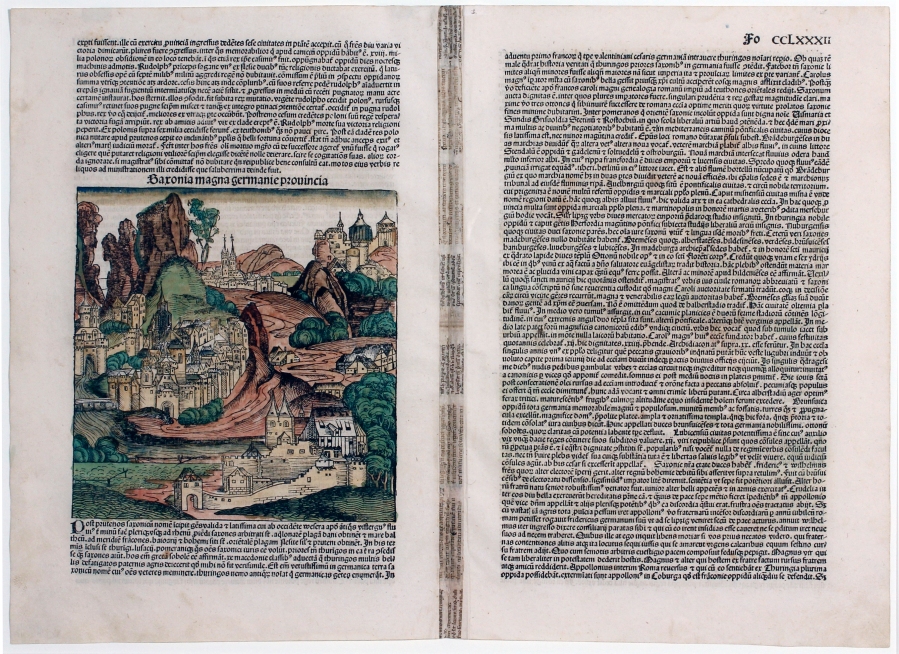 Prior to the use of one folded piece of paper to print several pages, early books required the printer to print in a two-sided, individual leaf (page) format.  The printed leaves, when arranged in order, required a strip of material to join every two pages. These joining strips were gathered and sewn together as a section, and the sections joined to create the book. New paper, being handmade and too expensive to cut into joining strips, compelled resourceful bookbinders to use scrap sheets from discarded books and documents. This vellum strip, holding Baronia Magna Germanie Provincia (Saxony) to its paired page, is from a handwritten Latin manuscript. The penmanship is somewhat indecipherable, but appears to be written in two hands, the lighter hand being the primary writer and the darker a commentary on the original text. Further research is needed, but regardless of its content, the presence of this strip of vellum between two leaves of the Liber Cronicarum serves as a visual and physical link not only between two pages, but also from the medieval world of scribes to the modern world of movable type.

My name is Bob Nowalk. I am a Master Instructor Emeritus of Culver Academies, a college preparatory boarding school in Culver Indiana. Having retired at the conclusion of the 2022 school year, I plan to continue working to share stories about art, artists, and the creative process through this blog and the exhibitions at The Unintended Curator Gallery at 114 North Main Street in Culver, Indiana. Please follow us on facebook for current offerings. Thanks for visiting.