NextWhat Is, Need Not Be
Art

Outsider, Folk or Naïve Art: What are we talking about?

Last month, a rural auction in Syracuse, Indiana, disbursed a private collection of thirty-nine paintings by Old Order Mennonite artist Emma Schrock. Schrock, known as the “Grandma Moses of Northern Indiana,” painted actively from 1964 until her death in 1991 at the age of seventy-six.  The marketing literature for the event describes Schrock’s paintings as a “Collection of Folk Art.” Another hand out referred to Schrock as a “Painter of Primitive Amish and Mennonite Scenes.” Interestingly, not more than 30 miles from the auction, in Elkhart, Indiana, several of Schrock’s pictures were included in the exhibition Outsider, Folk, and Self-taught Art at the Midwest Museum of American Art. Outsider Art is a term that has come to be applied to just about any ‘self-taught’ artist, though its origin was more narrow. The Midwest Museum of American Art also has work by Grandma Moses (1860-1961). So, what term best describes these artists? Are they Folk, Primitive, Outsider or, possibly, in the European sense, Naïve?

Many labels, such as Naïve, Folk, Primitive (meaning early), and Visionary – all viable ways to inform our understanding of these incredible individuals – precede the use of the term Outsider by more than half a century. Each term originally referenced a specific group of artists with some commonality. As critics and writers on art began to apply labels retroactively to artists who fit the profile, but may have lived many years before, this necessitated new ways to talk about artists who did not easily fit in with the others. When we examine what these artists have in common, it seemed that being self-taught, and standing outside the educational path to artistic practice could lead to a better description. Many, however, question whether such a wide range of disparate individuals should be included under a one-term-umbrella. 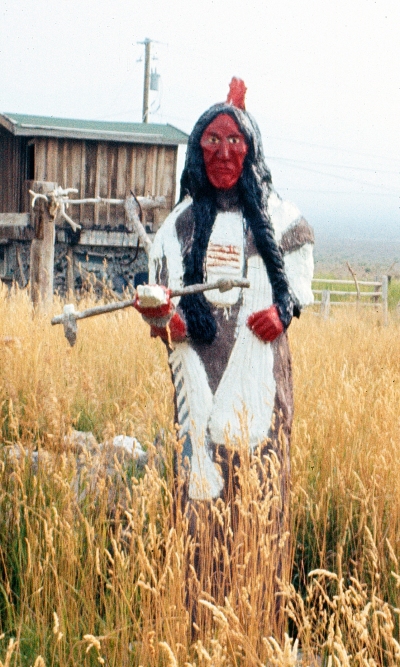 Spirit of the Ancestor, Chief Rolling Thunder, Cement, Steel, and Paint, circa 1970’s.

This is a legitimate question. It is essential that talk about artists be critically capable of evaluating them uniquely, rather than as an uncomfortable family, especially when the visual evidence spans from the quiet rural scenes of Emma Schrock to the cement and metal painted statues of Frank Van Zant, better known by his self-adopted Creek Indian alter ego, Chief Rolling Thunder (1908-1989).

We could begin by dismissing the notion that somehow being ‘self-taught’ is a unique and defining label for these artists. Many artists, throughout history, have worked and prospered without formal training. In America, we need go no further than Winslow Homer (1836-1910) who, in his teens, demonstrated a propensity for drawing, earning youthful acclaim as an illustrator and, much later, a painter. Homer’s paintings and drawings, self-taught as they are, exhibit none of the lyrical qualities of 19th century self-taught artists described, perhaps at times derisively, as Naïve, Primitive, or Folk. Artists such as the painter Henri Rousseau (1844-1910), whose ‘late-start’ and ‘imaginative-memory’ profile became the pattern for the European preference of the word Naïve.

Naïve painters, in the vein of Rousseau, typically come to painting – after several decades of life – with a burst of unfettered yet seemingly fully formed creativity. Henri Rousseau began painting in earnest at around age 42, Emma Schrock at 40, Grandma Moses at age 78, and Chicago’s Roman Golla (1917-2001) at 46. Each are part of what Chicago Sun Times Art Critic Harold Haydon, in a review of the paintings of Roman Golla, described as “that small band of imaginative artists who are called Naïve, lack academic training yet find the way to pictorial expression with complete conviction and success.” (Chicago Sun Times, December 15, 1978) Without art-school training, these artists paint largely from memory and imagination. They capture and make present a reality seen internally and preserved visually with a clarity of line and color. Rousseau painted memories of Paris as well as imaginative visions of exotic places. Schrock, like Grandma Moses, reflected her memory of rural life in America. Golla danced between memories of his native Poland and imaginative American visions. All share this Naïve trait of vivid memory and imaginative vision.

The term Folk should be familiar enough to most readers, as it also finds its way into writings about Emma Schrock, Grandma Moses and the Peaceable Kingdom painter Edward Hicks. This is mainly due to their connection to rural America. Folk Art, in its basic sense, generally describes an artistic activity related to utilitarian objects; objects in which rural culture places value first in an ability to perform a function, and second in aesthetic design. These objects, everything from decoys to furniture, have a purpose, though, in the hands of a master craftsperson, their sheer beauty inspires both appreciation and acquisition by collectors. Painting and sculpture, originating in these communities, becomes associated with these objects, and, thus, the term Folk is applied. Some writers associate the visual style of these artists with those of America’s Colonial past, and add the word Primitive as a means of placing them stylistically within a linear art historical time-line.

As works by Folk and Naïve artists came to be more widely appreciated in the early 20th century, this description was also applied, in retrospect, to those 19th century itinerate American artists who worked a circuit providing portraits, still-life and landscape paintings for prosperous farmers and professionals in small towns. By the mid-20th century, those who talk about art began to look for other avenues toward greater appreciation. This is how the labels Visionary, Neo-Primitive, Grass-Roots and Self-taught joined the lexicon. They were simply ways to enrich what astute critics and collectors saw as important.

The term Outsider first appeared in print in 1972. Its origin has much to do with the growing appreciation for Naïve and Folk art in the early 20th century because it intertwines with the development of Modern Art in Europe. The story of Modern Art is really one of multiple cultural appropriations and influences. Artists like Van Gogh and Whistler in the 19th century, and Picasso in the early 20th century, collected and drew influence, respectively, from the art of Japan and Africa. The paintings of children inspired the work of Belgian painter Paul Klee, while, after WWII, artist Jean Dubuffet, of France, found artistic direction while collecting the art of mental patients.

Dubuffet termed his new style Art Brut (Raw Art), and promoted the artists who influenced him. As paintings and drawings of these artists found their way into exhibitions and collections, English art critic Roger Cardinal coined the term Outsider Art as an English language variant of Art Brut. Chief Rolling Thunder epitomizes the defining characteristics of Outsider artists. He is a creative visionary who veers not only from traditional visual practice – Rolling Thunder was self-taught – but also moves the needle across the spectrum of socially normative psychological health – Frank Van Zant’s apocalyptic visions, brought on by his experiences in WWII, propelled him to become Chief Rolling Thunder and make art.

Since the 1990’s, the term Outsider Art has moved from its original meaning to become a general embrace of any artist not following a traditional path toward a career in the arts. As mentioned above, not everyone prefers this because the term does not actually define a style of art or a school of thought but, rather, indicates a status of training or position in relationship to the gallery process. Outsider Art, though, seems at the present, to be the getting the most traction as an inclusive term.

Does this mean older terms have no application in today’s talk about the spectrum of art activity emanating from these innately gifted individuals? Until something better emerges, you might consider the following: if the Outsider artist’s work reveals a simple, colorful, childlike depiction of memory and fantasy, you could work the word Naïve into your vocabulary. If a reference to a rural life is readily apparent, add the label Folk to enhance the discussion. If the art is over-the-top fantastic in subject matter or focuses on uniquely imagined worlds, Visionary is very appropriate. And, finally, if you discover work that reveals an artist to be somewhat distanced from society, insular, living on the edge, perhaps even with an ax to grind, yet still bursting with creative vision and power – in other words an ‘outsider’ in the purest sense – your description should reveal what you know.