Five American newspapers reported the circumstances surrounding the passing of H. Victor Riedenharty in New York City on September 11, 1908. Though brief, the September 12th editions of the New York Times, the New-York Tribune, The Sun (New York), The Evening Star (Washington D.C.) and the Washington Post each covered the story in one to three paragraphs. Civic responsibility to inform the public of America’s loss was not the motivating factor. H. Victor Riedenharty, misspelled as Reidenhardy in each article, was unknown, penniless, and of interest only because of his frustrated aspirations in knowing himself to be an artist, a painter of portraits.

Austrian by birth, Riedenharty merited mention not for the discovery of his paintings, but for the ephemera found in his possession after his death.  This consisted of photographs – the New-York Tribune says “negatives” – of a number of notable citizens, including, among others, images of President Roosevelt, William Randolph Hearst and Mayor McClellan. There was also a letter from Secretary William Loeb Jr, Presidential secretary to President Theodore Roosevelt. Secretary Loeb had written the artist to politely decline and return Reidenhardy’s portrait of the President.  “The President” The Sun reports, “accepted gifts from personal friends and relatives only.” All of this drew a humorous image of a pretentious unknown artist of dubious merit reaching beyond his station.

What did the portrait of Theodore Roosevelt look like? We have no idea. Prior to this article, an internet image search under the artist’s name, even with the alternative spelling, would yield little. In fact, the only artwork currently capable of providing even a glimpse of Reidenharty’s artistic ability is a signed portrait I came across in one of those serendipitous moments of life. It is a portrait of Father John Hahne, who, over 125 years ago, was Pastor of Emmanuel Catholic Church in Dayton, Ohio.  Signed and dated H. Riedenharty, 1877, this portrait is a prime example of Naïve art. As such, it becomes understandable why Secretary Loeb declined the portrait. It would take another twenty years before astute collectors discovered and valued the contributions of Naïve and Folk artists to the story of American art.

Father Hahne, however, would have been an ideal patron for Riedenharty. Hahne, by all accounts was a kind, generous and open person. In the mid-19th century, he presided over the building of Dayton’s Emmanuel Catholic School and Church, while also founding the Dayton Orphanage. A year after Riedenharty’s portrait, Father Hahne continued his work by establishing Dayton’s St. Elizabeth Hospital.  If Riedenharty contacted Father Hahne about painting his portrait, we can only assume he received a welcome response. What Father Hahne thought of the work would not have mattered as much as his encouragement of a fellow German-speaking immigrant. 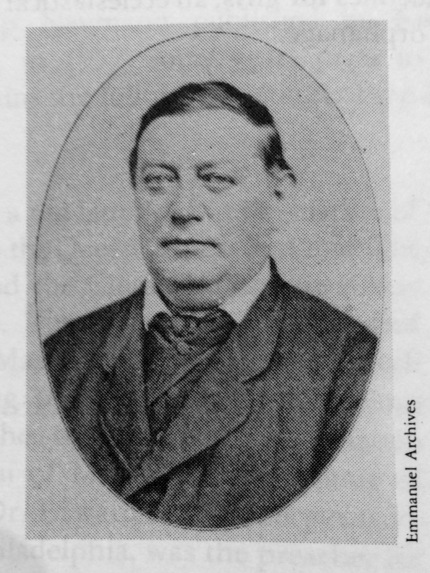 All Naïve and Folk portraits resound with a certain familial resemblance. Whether from the hand of Edward Hicks, Horace Pippen, or Grandma Moses, they tend to employ an open-eyed economy of line, shape and color. As a Naïve artist in the tradition of the early American limners, Riedenharty played strongly with the balance between “likeness” and “type.” He would have desired his portrait to be “read” as the person whom it depicts, while, at the same time, revealing the quality of person his artistic vision imagined. The cross on Father Hahne’s prayer book, thus, would be as important an indicator of his position in life as his black coat, short white collar, red chair, and green walls. If there is any doubt about Riedenharty’s ability to depict a likeness of Father Hahne, there is a photographic portrait in the archive of Emmanuel Catholic Church showing him to be much as the artist saw him.

So, how did this come to be in my possession? After completion, Father John Hahne’s portrait most likely hung somewhere on church property. However, perhaps years after Father Hahne’s passing in 1882, the portrait eventually found its way to the church coal bin, where it remained until 1994. With an acquired layer of dark soot, several slight tears and in an almost unreadable state, the portrait emerged during a overdue spring-cleaning in 1994. Initially destined for the dumpster, then Pastor Lee Sciarrotta, with centuries-old Catholic respect for images, offered the damaged portrait to me as “something you may be interested in, otherwise it will be need to be pitched.”

Not knowing exactly what was under the soot, but always open to adventure, I boxed the portrait and held onto it for the next 14 years, waiting until I could afford to have it restored. This came in 2008 when Monica Radecki of Radecki Gallery of South Bend, Indiana, began to bring Father Hahne back to life. With the restoration completed in 2009, the painting is now on loan to the Crisp Visual Art Center, where Father John Hahne, by H. Victor Riedenharty retains its place as an excellent example of mid-19th century American Folk portraiture.