When Leigh Gignilliat prepared to sail home from Europe in July 1919, any enthusiasm for the Allied victory he had participated in was most likely tempered by a growing awareness of the loss of so many Culver men, principle among them, his brother-in-law, William Alexander Fleet, who perished in the battle for Arras on May 18th 1918. After serving as commandant of Culver Military Academy and Culver Summer School for more than 20 years, Gignilliat undoubtedly knew the faces and names of all of the Culver men responding to America’s need for a fighting force. Like any good teacher, these were his boys, many of whom he watched grow into manhood. In the opening paragraphs of his essay “Culver’s Contribution to National Defense,” published in Culver in the World War, Gignilliat spoke touchingly of his experience,

“My own feeling of affection for them and of pride in the way they acquitted themselves transcends expression and is for the heart rather than the printed page. I think of them, Gold Star Men and all, as still marching on in that ever lengthening column of former Culver cadets; only some have gone a bit further on, leaving their names and sacrifices to be enshrined in the imperishable traditions of their school.” Culver in the World War, 1930, page 11.

Gignilliat deeply believed in Culver’s role in each alumnus’s personal response to the war effort. The concept of honoring the war dead through the construction of a Gold Star room in the Culver Legion Memorial Building was one idea he embraced. When the building was dedicated on November 2, 1924, a photograph of each of the 62 Gold Star Men, surrounding a marble tablet with inscribed names, hung in the Gold Star room. 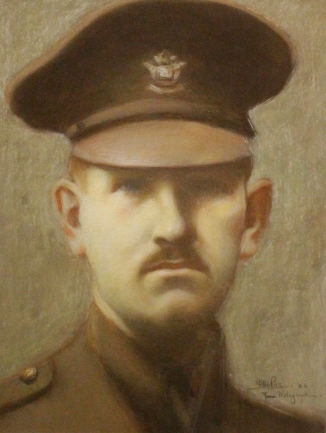 The photographs, created in a uniform size and style by Moffett Studios in Chicago, were sepia-toned copies of formal and informal Service Portraits mainly sent by family members of the deceased. Unfortunately, given the variety of sources for each photograph, the overall effect felt uneven. Recognizing that art has the power to keep a person’s presence alive in the world of the living, General Gignilliat invited a 23-year-old artist from Indianapolis, Hugh Poe, to visit the campus. Gignilliat met Poe at the opening exhibition of the Hoosier Salon at Marshall Field’s in Chicago, where Poe had garnered attention for his artwork and Culver Military Academy had sponsored a prize. Poe received a commission to create pastel portraits of each of the Gold Star Men, correcting their dress to reflect the uniform in which they served.

Provided with a studio in East Barrack, Poe signed a contract to paint 63 – an additional Gold Star man had been identified – 12” x 15” pastel portraits on board, at a rate of $24.20 per portrait. He began work in the Spring of 1925. Working from the sepia-toned photographs with notes written by the families of the deceased regarding the color of eyes, hair and skin, Poe completed several portraits in the first few months. The task of interpreting the monochromatic portraits in color, however, proved more difficult than expected. Some portraits viewed by relatives of the deceased were praised overwhelmingly while others were rejected outright and needed to be redone. Finished portraits were sent for framing, and by April, 14, 1927, having moved his studio to one of the towers in the Recreation Building, dubbed Culver’s Greenwich Village by the cadets, Poe registered 25 portraits complete. The number needed, however, continued to grow. While preparing the Culver Legion’s publication of Culver in the World War, Colonel C.C Chambers’ ongoing research brought new names to light, lengthening the list of Gold Star Men. By December 1928, Poe had completed 68 of 70 known Culver Gold Star Men and Gignilliat suspended the project.

At the time of the publication of Culver in the World War in 1930, 85 Gold Star Men had been identified, but only 68 faces adorned the Gold Star room. Why the project was not concluded is unknown, but a letter from Gignilliat to Hugh Poe in 1933 hints that the reason was financial.

“The depression has affected us like it has all schools in the matter of enrollment … Plans for redecorating the Gold Star Room, like everything else, is at a stand still just now. When times get better and there seems to be a chance of anything being done there, I will let you know, and shall certainly be glad to see you have a hand in it.” Letter to Hugh Poe, February 23, 1933 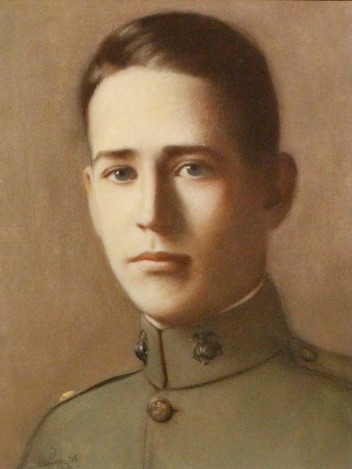 Space forever being at a premium at Culver, pressure to make the Gold Star Room less of a memorial and more a usable place of study began in the years before Gignilliat’s retirement in 1939. Talk of removing the portraits and simply carving the names of the dead into the wall in wood or stone was anathema to the general. In a strongly worded appeal to Colonel Elliott, dated July 24, 1939, Gignilliat argued, “…my personal feeling is, and very strong, that it would be a mistake to eliminate the pictures.” Elliott acquiesced to the general’s plea, but in the early 1950s, after Gignilliat left this world for his eternal rest, the pictures were removed, taken from their frames and stacked in a box. The Gold Star room became a place of study accommodating the book collection of C.S. Young. The box of portraits was placed in an unidentified storage vault.

Passed over in the 1975, 1982 and 1994 appraisals, the box containing the portraits was, it seems, forgotten, finding mention just once in the decades following their removal. In a 1986 note to Superintendent Ralph Manuel, former Superintendent John Mars mentions seeing the box of portraits in a vault on campus and taking three of the portraits out of their box to show to several art experts, including Jean Williams, widow of former Visual Arts instructor Warner Williams. After placing the portraits back in the vault in the Culver Legion Memorial Library, Mars suggests the portraits may have some value, but nothing else is noted. Eventually, when the library moved to the present Huffington Library, the box along with several other boxes of alumni memorabilia, found its way to the basement of Eppley Auditorium, where it sat, unknown, for nearly two decades. 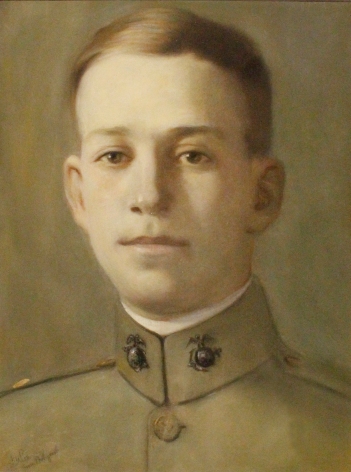 In October 2011, while researching images for the 2012 Woodcraft Centennial Celebration, Culver History Curator Jeff Kenney and I, as Art Collection Curator, were working in the basement of Culver Academies’ Eppley Auditorium when a box under a table across the room caught my eye as I sat on the ground perusing a yearbook from 1913. On a faded yellow label, partially blocked by another box, the word Gold was visible above the word Port. Gingerly moving the other box aside, the label marked Gold Star Portraits appeared under the table. Pastels being capable of easy damage if moved too abruptly, the string holding the box was slowly unwound and the box opened revealing a single Gold Star Portrait lying on top of a stack of similar sized boards. Closing the box completely, Jeff and I cleared a space and gently placed it on a table. After some consultation to quell the excitement, we walked the box from the basement of Eppley Auditorium to the Archive in the Crisp Visual Art Center.

Research into the story behind the portraits began immediately. Not wanting to take the risk of sorting through the box without an expert on hand, as there was no certainty of any of the portraits below the initial portrait being readable, we decided to allow the portraits to rest in the archival environment until a conservator could be present. We located several files detailing the history of the portraits, including letters exchanged between Leigh Gignilliat and Hugh Poe. We settled on a measured approach to any possible restoration of the contents of the box. Our highest hope imagined a possible display during the 100th anniversary of the Armistice in 2018.

Given the importance of the portraits and the possibility of damage under the initial portrait, we decided to plan a teachable moment by bringing students, staff, and alumni together, with a conservator, to open the box. This would require two things: a competent conservator and funding, should the portraits be capable of restoration. Conservator Monica Radecki, of South Bend, accepted the opportunity to play a part in the opening of the Gold Star Portrait box. She recognized that this would be a risk, but in the least would make students aware of the care and handling of precious artwork. 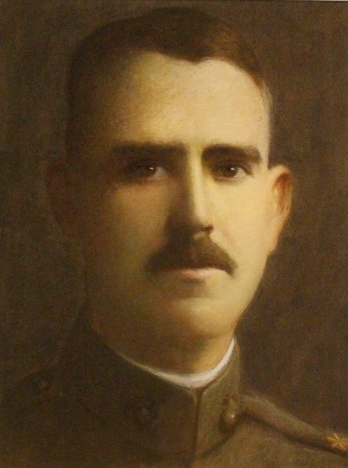 It took several years to find a funding source, but, finally, on October 10, 2016, Radecki opened the box in the presence of a gathering of students, staff and alumni in the Toots Henderson Auditorium. Fortunately, the opening revealed tissue interleaves between the portraits. This gave those gathered hope for more than one portrait to emerge undisturbed. After the first row of seats in the auditorium were cleared, the portraits were placed on the front table, one by one. As each portrait emerged, the names of the deceased, written on the back of each board, were announced. Radecki spoke about the condition and quality of each portrait, noting any needed attention to fix mishaps.

After an hour, 68 portraits had been lifted from the box. All, but one, identified by name. The overall damage was determined to be slight and restorable. Replaced in containers holding 8 to 10 portraits with new tissue, the portraits were returned to the Archive. In the summer of 2017, drawing from a posthumous gift by the late Richard Ford, of Wabash, Indiana, Radecki Studios in South Bend conserved and framed the portraits for the World War I Centennial.

The exhibition of the portraits “Here Now the Roll Call, Gold Star Men of Culver, World War One,” opened in the Wolfe Gallery of the Crisp Visual Art Center on November 10, 2018. The experience of seeing the restored portraits is revelatory. An important window into the history of Culver, the exhibition will remain in the gallery until the conclusion of Culver Summer School on August 2, 2019.

Culver parents often talk about the Culver experience being transformative in the lives of their children. We, the staff and instructors, talk about the Virtues: Wisdom born of Knowledge, Justice steeped in Compassion and Courage lived in Truth. Our Communications Department describes our overlapping summer and winter constituencies as One Culver. All of this merges when walking into the Wolfe Gallery. While viewing the portraits, there is certain realization that transcends the call that follows the annual reading of the names of our Gold Star recipients during Memorial Day, “They died in the service of their country.” The roots of One Culver rest deep within a reading of the faces and names of the Gold Star Men of World War I. 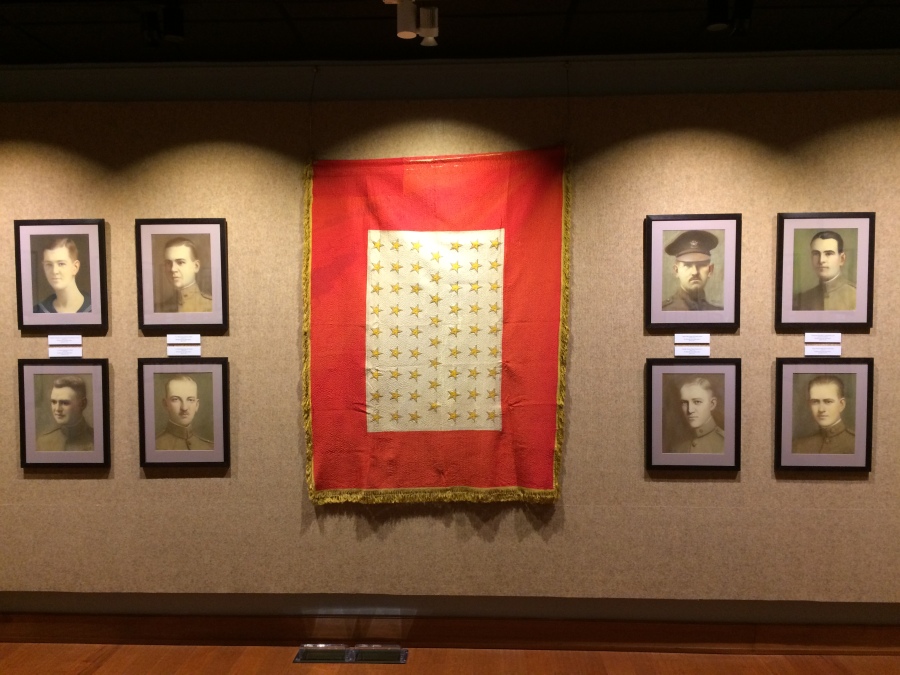