Some years ago, while visiting the home of an older art collector to view his small but beautiful collection of 18th century Northern European landscape paintings, I became curious about his motivation to collect art. When questioned about this, he said that he and his wife had not really thought seriously about the art on their walls when they were young, but after a number of successful years in business, they decided to do something enjoyable with their living environment. “Giving your children the gift of living with art,” he said, “has many long term rewards.” Collecting art became one way of providing an intellectually and visually stimulating home-life.

They began by visiting galleries, reading books, listening to lectures and generally immersing themselves in enjoying art before they bought their first piece.  They realized, he said, that “even though the history of art is shaped and told through a finite number of ‘A-list artists,’ phenomenal work is and has been made by many, many artists, both known and unknown. There is no reason to ignore them, and,” he added, ” you don’t have to be wealthy to pursue them.” I asked him what would be the best advice he could give regarding collecting. He said, “Three things: look at a lot of art to discover what you really enjoy, don’t be afraid to occasionally reach beyond your budget if you find something wonderful, but, at all times, buy what you like.”

I appreciated this advice because it resonated with an experience I had when first married. At a local auction, I pursued a signed print by Salvador Dali. I came to see that I did this not because I liked the work – I did not – but because the artist who created it was “famous.” I am embarrassed to admit, I actually purchased it because I foolishly felt the need to impress our friends and family when they visited. We hung it in our kitchen, where we gathered with friends, but viewing it gave neither of us any joy. Every time I sat down to eat, it reminded me of how my own insecure notion of status drove me to purchase it. After a couple of months, we sold it to a dealer, and I swore I would never put my wife through this again. If art came into our house, it would be because one of us loved it.

Today we own many pieces – traded, bartered, bought, or gifted – and each of them brings something unique to our visual environment. They also inform and inspire my teaching, as I am prone to drag any work into my classroom for a day or a month just to enrich student learning. And, with all these artists silently chattering away on our walls, my appreciation for artistic voices has grown to embrace a wide variety of disciplines and styles. I enjoy puttering away at discovering just who has come into our home and how I might better understand their creative efforts.

One piece I have been researching lately is a work I bought for inclusion in an exhibition designed to expose our students to the world of Outsider Art, work defined by self-motivated and self-taught visionaries. This small painting, signed “Caravario” in the lower right corner, appeared in a French Auction in early spring, 2017. It caught my attention at a single glance. The overall composition consists of a seaside landing with two red tiled-roof houses located on the right, their blue-green walls covered in foliage.  Several trees grow behind the houses, three poplars and one large oak-like tree standing on a spit of land jutting out into the sea. 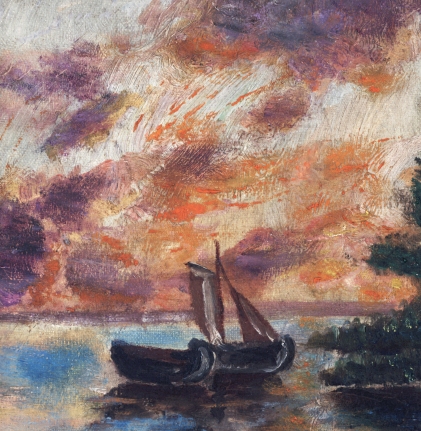 Two boats, one with sails, float in the bay, just left of center. A variety of acid greens, and flame orange strokes dot the paths on the deep brown landing. All of the action happens under a turbulent orange, gray and violet sky.

This would all appear very normal if it were not for the addition of sixteen naturally comfortable women populating the foreground of the canvas.  They stand alone or in groups – several are swimming in the water – talking, walking, watching, or engaging with each other. The color of their hair varies but the pink-whiteness of their bodies creates a visual staccato across the surface of the painting. Stylistically Naïve, to use the European preference in naming this genre, the work exudes an innocent visionary charm. The dealer listed the title as Le Jardin d’Eden and suggested Caravario to be a 19th century monk and artist.

Unfortunately, every effort to verify anything beyond the image being signed ‘Caravario’ proved fruitless. Multiple search configurations only brought up the 20th century Catholic Saint Calisto Caravario, monk and martyr. Nothing in his biography suggested artistic ability or a Parisian moment; the saint was Italian and died in China. On a French census site, I did find two people with the last name of Caravario living in Paris in 1900, though neither were listed as artists. This does not mean that one of them did not paint the picture. It simple leaves me with no verification of Caravario being self-described as an artist. Undeterred, I turned the canvas over to see if I could tease any information out of the physical evidence found there.

The canvas is stretched but unframed. There are marks, stamps and writing on a few of the stretcher bars. All show evidence of a prior cardboard covering, as a serpentine pattern of glue residue, some with pieces of a white cardboard, is still visible.  We can clearly read several marks on the canvas fabric and the stretcher bars. The most prominent is the word Eden, written in black on one bar.  Unfortunately, as it appears to be written in magic marker over the glue. Thus, its arrival after the removal of the white board indicates it cannot be original to the work. This calls into question the title, Le Jardin d’Eden. Looking at the painting, the subject may seem like an Eden to a male viewer, but it is not the biblical Eden. Therefore, we can conclude the title to be a misattribution provided by the dealer to market the work.

The second noticeable mark is a ‘4’ followed by an ‘F’ printed in the middle of the fabric and again on a torn label attached to one of the stretcher bars. ‘4’ refers to a standard size 33cm x 24cm and the ‘F’ marks it as designed for a portrait or figure.  Curiously, our artist decided to ignore this and paint a landscape, which, if done on the suggested canvas, would have been marked with a ‘P’ for paysage and 33cm x 22cm. Such sizes became standardized in France in the 19th century.

The third, and most interesting mark, is a brand. Inside a circle, an anchor crosses a mace with two intertwined snakes. The winged hat of Hermes tops the mace. On either side are the letters L and F. This identifies the canvas maker as the Parisian art supply shop Lefranc et Cie. I contacted Pascal Lebreuche, a conservator in Paris who maintains a database on French art material suppliers, and asked him about the mark.  After examining several photographs of both sides of the artwork, Monsieur Lebreuche suggested 1920 as a possible date for the canvas. He also suggested a new title, Femmes Se Baignant Sur Une Plage Au Crépuscule (Women Bathing on a Beach at Dusk). He has a listing of many artists buying art supplies from Lefranc et Cie, Braque* and Picasso among them. Unfortunately, Caravario is not on the list.

Given what we know about the work – women bathing on a beach at dusk, by Caravario, oil on canvas, circa 1920, Naïve in genre – we have enough information for a cursory label, though the image itself begs interpretation. Does the subject depict the Sirens of Greek legend, a community of Amazons at rest, or a single-sex naturist colony? There is no way of knowing, so the need to maintain further research is a given. Therefore, for now, our avenue toward appreciation of the work clearly rests upon the visual evidence at hand; the compositional play of line, shape, and color across the surface of the painting. And this is as it should be. Ultimately, the visual presentation is what we admire most in any work of art, and it serves to enrich our understanding and appreciation for all things beautiful.

It is here my experience of purchasing this painting, aligns with the advice I received so many years ago. First, all of my study and research about art led me to see this work as a viable means of understanding Outsider Art. Second, though my final bid fell far below my reach, what I find worthy of contemplation in the work is independent of its monetized value. Third, and most importantly, I genuinely like the artwork, so it does not nag me from my kitchen wall.

*Information concerning a similar mark, related to a painting by Georges Braque, can be found on the Metropolitan Museum of Art web site, https://www.metmuseum.org/art/libraries-and-research-centers/leonard-lauder-research-center/cubist-collection/archival-labels/art-supply-shops/lefranc-et-cie