Some artists burn through their brief existence like shooting stars across a summer sky. We see them as streaks of light, sparkling in the darkness, spinning and twisting through space, a silent dance for those awake to their presence overhead. Upon our witness, we stand in wonder of them, gazing in the place of their passing long after our eyes settle down with the night’s remaining light. Fortunately, unlike the ephemeral nature of light, works of art remain within the presence of the living after an artist’s passing, visual voices sharing the artist’s ideas with each new generation of witnesses. Regardless of the contemporaneous value given to the work of any one artist, the beauty of art history lies in each succeeding generation’s rediscovery of the visual record. Or, more completely, it lies in each generation finding its place in the story of art, knowing what to value, what to set aside, and what to dust off for the eyes of a new generation. Finding Roman Golla, an exhibition coming to the Crisp Visual Art Center in Spring 2018, is just such a dusting. 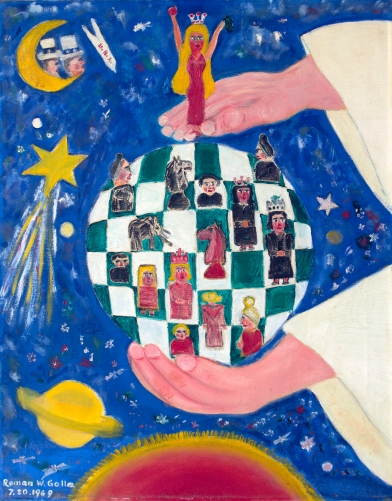 It unfolds time’s wrapping around the life of one Polish immigrant who, after living in the shadow of war, found new life in America at the age of 34. His name is Roman Golla. He was born in the region of Zakopane, in Southern Poland in 1917. He arrived in Chicago in 1951, but never self-identified as an artist. His passion and proficiency revealed itself in the game of chess, and earned him a position in the US Open Chess Tournament in 1953. While living in Chicago he worked, played chess, sang songs, missed home, never married and, in his 47th year, for reasons unknown, Roman Golla began to paint.  He continued for three decades, stopping a few years before passing away alone, without issue or marital attachment, in December of 2001, at the age of 84. Dying a pauper, Roman’s life‘s work was sold to cover his debts. Fortunately, though dispersed at his passing, over ninety canvases, a smattering of drawings, and a handful of sculptures remained together. It is as if some benevolent hand suspended the inevitable dissolution of the warp and weft of his story, until, it could be seen anew.

I’m a teacher. I spent over 20 years in inner-city public schools and just about as many in private. I have taught every level of student from kindergarten to university. I have also spent innumerable weekends and nights teaching in museum education programs, because, well, that is where the art is, and there is nothing like the presence of actual works of art to excite a student’s interest. No matter where I found myself teaching, I have consistently promoted first-person art experiences for my students. If I could not take them to the art, I would bring the art to them by dragging both artworks and artists into the classroom setting, sometimes with a grant or administrative support, but mostly at my own expense.

This particular experience began with the idea of planning a student encounter with Outsider Art. While cruising the internet for ideas, I came upon a painting of a naked female lion tamer, posted online by a man needing to clear space in a rentable storefront in Chicago. He had kept the painting, along with 90 or more of its siblings, locked away for 12 years. Once seen on line, I had to see it in person. The man’s original intention involved opening an art gallery, but time fades many a good idea, especially when placed in a large storage room. He knew little more than the name of the painter, and I knew even less, but the image of the lady lion tamer, and my desire to share challenging art with my students, caused me to embrace the risk of discovery in search of Roman Golla. What I found continues to speak volumes about the process of art, the creative impulse, and the origin of innate vision beyond the visible world.

Since 2014, the work of Roman Golla has been a consistent interest. The hoped-for exhibition is finally taking shape as a 25-30 piece survey. I am presently building frames for each of the selected images and will work with my students to curate the final show. It will open, as mentioned above, in the galleries of the Crisp Visual Art Center on the Culver Academies’ campus, Culver, Indiana, at the end of April 2018. If you know of anyone interested in Outsider Art and the Art of the Naïve, please generously share a link to The Unintended Curator blog. I welcome all comments. If you plan to be near northern Indiana sometime in May or June of 2018, please contact me, and I will personally walk through the exhibition with you. The images posted here are just a taste of the wonder found in Finding Roman Golla.